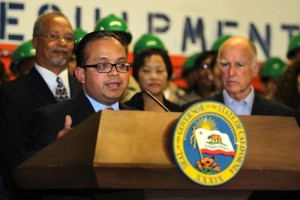 Monterey County Supervisor Luis Alejo was born and raised in our area, and is a son of a Vietnam-era veteran. His family originally came to work in the agricultural fields of the Salinas, Santa Clara and Pajaro Valleys as migrant farmworkers in the 1950s.

Luis graduated with honors from UC Berkeley with dual bachelor’s degrees in political science and Chicano studies, obtained his Masters of Education degree (Ed.M) from Harvard University in Administration, Planning and Social Policy, and received his law degree (J.D.) from UC Davis School of Law.

After finishing his graduate and professional studies, Luis returned to his hometown of Watsonville to work as a legal aid attorney where he championed the rights of working families throughout the Monterey Bay area. He later worked as a staff attorney for the Monterey County Superior Court, where he assisted thousands of self-represented litigants throughout Monterey County who could not afford private attorneys. Prior to becoming an attorney, Luis was high school teacher working with “at risk” youth.

Luis has served on numerous city, county and federal commissions, including the Watsonville Planning Commission, the Santa Cruz County Juvenile Justice and Delinquency Prevention Commission, and the California Advisory Committee of the United States Commission on Civil Rights. He served as Mayor of his hometown of Watsonville in 2010 and served as Mayor Pro Tem in 2009. While serving as Mayor, Watsonville experienced the lowest crime rate in 30 years.

From 2010 to 2016, Luis was elected to serve as your State Assemblymember in Sacramento. He rose to be the Chair of the powerful California Latino Legislative Caucus and the Chair of the Assembly Environmental Safety and Toxic Materials Committee. He also served on the Assembly Judiciary, Local Government, Veteran Affairs, Governmental Organizations, Labor and Employment and the Budget Committees.

In 2015, Luis had a record number of 20 bills sent to Governor Jerry Brown (18 were signed), more than any other legislator. He received the “2015 Legislator of the Year Award” by the California League of Cities for championing AB2 to bring back redevelopment and a new affordable housing source for disadvantaged communities throughout California. He was also voted “2013 Most Effective Democratic Assemblymember” by the Capitol Nooner after his landmark $10 minimum wage bill (AB10) and his drivers licenses for immigrant’s bill (AB60) were signed into law. During his tenure,  earned a reputation in Sacramento for being an effective legislator who worked in a bipartisan manner across party lines to build consensus and find common sense solutions to our state’s most pressing challenges.

As a county supervisor, Alejo has led on championing immigrant and civil rights, housing and homelessness, economic development, clean drinking water, water infrastructure, access to justice/courts, ethnic studies for California schools, cannabis, youth leadership, the Salinas Soccer Complex, the 2020 Census, environmental and coastal protection, veteran and military affairs and expanding healthcare. He also authored the first resolutions in the country recognizing the human right to water, becoming a Dreamers County and a Welcoming County for immigrants.